Southern Steam in the 1960s – Photographs by Tim Carbury

A great new exhibition for steam engine buffs has opened at Eastleigh Museum, and runs until 8 September 2018. The exhibition presents a selection of black and white photographic prints from the archive of the late Tim Carbury, now in the care of the Mid-Hants Railway Preservation Society at the Watercress Line.

In the mid-1960s the line from Waterloo to Southampton and Bournemouth, via Eastleigh, was Britain’s last main line to be operated by steam locomotives. All this changed in July 1967, when the line was electrified. A number of enthusiasts, of whom Tim Carbury was one, set out to record scenes of steam locomotives at work on the main line, and the infrastructure and people associated with them, before they disappeared for ever.

The photographs in this collection show steam locomotives in the run-down surroundings of Nine Elms shed, outside Waterloo, and at work at Waterloo, Woking, Southampton Docks and elsewhere.

Today, steam (including some of the locomotives pictured in the exhibition) can still be seen in action at the Watercress Line and other heritage railways, and occasionally hauling excursions on the main line. However, these photographs will take you back to the days, not so very long ago, when steam trains were still a part of everyday life. 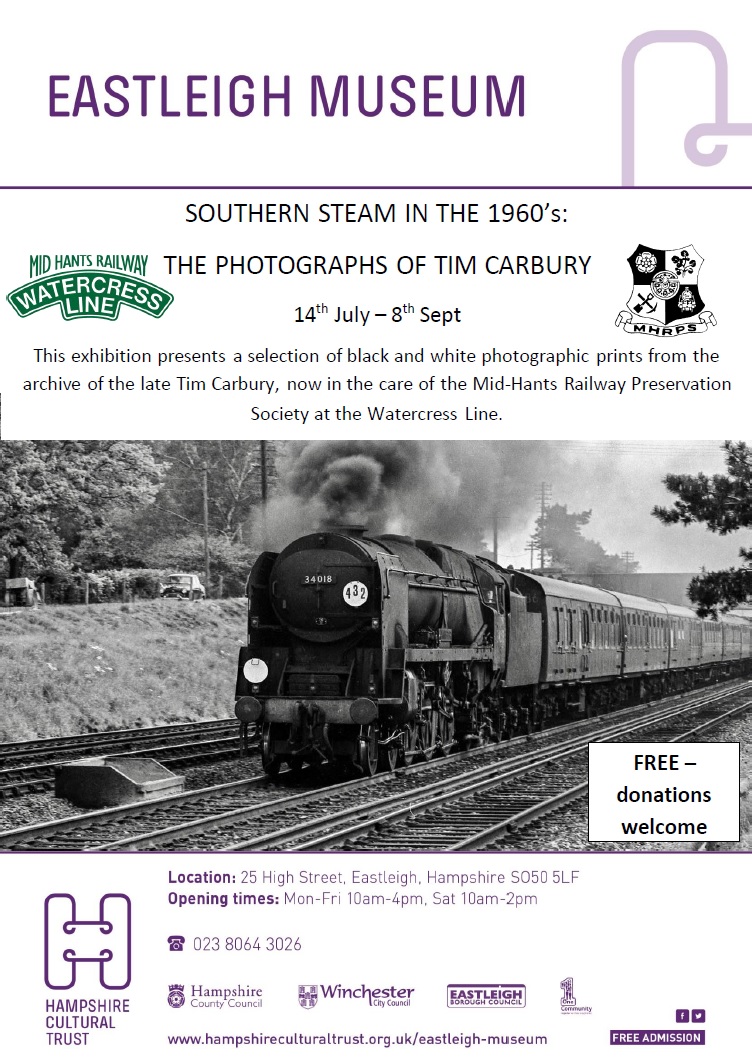 Eastleigh Museum- Steaming on in!

To keep the children happy, the museum is running a free steam-engine themed trail throughout the summer holidays, a colouring corner, and a hands on wooden train set is available for play in the midst of the gallery. Admission to both the museum and the exhibition is free and opening hours are 10am-4pm Monday to Friday and 10am-4pm on Saturday.