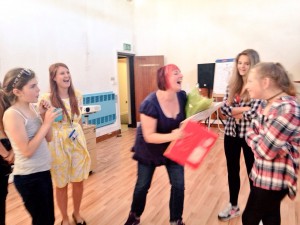 Amie, Choir Leader, and some of the young carers having fun at choir!

When I was a child, singing was one of my favorite things to do. It didn’t matter where I was or who I was with for that matter, I would sing until my heart felt as if it would burst. As I got older though and became more conscious of the world and of myself in it, I started to gain awareness of the fact that I wasn’t very good.  I didn’t get the lead roles in the school musicals, I couldn’t hit those high notes and unfortunately I wasn’t always in tune. My confidence began to slowly diminish and I became a ‘closet’ singer; one that would sing in the shower when no one else was in the house and in the car where no one else could hear me. It was only at the age of 25 when I decided to learn the guitar that singing re-entered my life and I realized how lonely I had been without it all those years. I finally felt reconnected to a long lost part of myself that I didn’t even know was missing.

Then I had this thought, if singing helped me, then maybe it can help other people to? In essence, this was the moment that I planted the seed for the Young Carers Choir…

The pilot for the choir started in October 2014 and within the first session it became undeniably apparent that I had started something extremely powerful. During the following months, I witnessed the healing effects of singing in its full force. Something about coming together in this way opened up the young carers emotionally, to the extent that their eyes would be streaming with tears as they sang songs that touched their soul. Fifteen months on, with thanks to funding from Youth Music, the Choir is still going strong and is regularly accessed by fourteen young carers on a weekly basis.

Don’t just take my word for it. In a recent evaluation session, this is what four of the members of the group said they had gained since joining Young Carers Choir:

And it’s even backed up by Science! Researchers at the Royal College of Music found that the overall act of singing had an inherently relaxing effect on the listener as well as the performer and that it positively affected mood and stress levels.

So, there it is. Singing is good for you so why not spread some musical cheer and sing aloud for all to hear!

Current funding for the Young Carers Choir comes to an end in May, if you think you could help us to continue this amazing group for our young people please contact Jo Miles on jmiles@1community.org.uk .