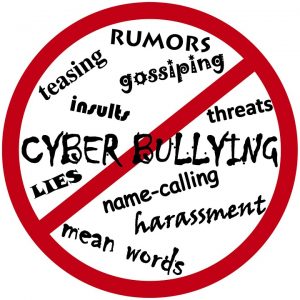 While technological advances have no doubt enhanced the standard of living led by most young people, the advent of Internet and mobile communication tools has led to an unforeseen issue – cyberbullying. This very real problem has left several people in the younger generations vulnerable and open to emotional distress and anxiety. A staggering quarter of the teens surveyed in 2014 report having endured repeated experiences of bullying online or on their mobile devices. Here is an overview on cyberbullying and the ways that adults can help teens cope if they find themselves targeted by cyberbullies.

Cyberbullying is any type of harassment that is conducted via email, chatroom, social media, discussion groups, comment sections, instant messaging, or any other Internet service. Since the dawn of smartphones, text messaging harassment has become more common, and is now included under the cyberbullying umbrella.

Cyberbullying encompasses teasing and poking fun at others in a negative manner, defamation of another’s character, spreading rumors, and stalking. While these behaviors are far from new, the injection of 21st century technology compounds the underlying issues. First of all, cyberbullies are able to invade the personal space of their targets whether they are at school, work, or at home. These targets can be reached at any time of day and they have nowhere safe to escape to. Also, the Internet provides a large platform with an infinite audience that can be reached instantaneously, usually by an instigator that can choose to remain anonymous.

It is extremely difficult to control messages, photos, and videos that are circulating electronically. 87% of today’s youth have witnessed some form of cyberbullying. So, not only does the original act of cyberbullying initially hurt the victim, but also the fear of the content resurfacing is equally menacing. That is why young victims are going to be dire need of emotional support and reassurance. They need to know that by confiding in an adult or any authority figure, they are doing the right thing. After that first step, be sure to validate their inner feelings by agreeing that no one has the right to attack them in any way. Verbally recognize the pain that the victims are experiencing.

Always advise children and teens to carefully manage the amount of personal information that they choose to share online. Remember, cyberbullies can and will use any information that they can to hurt their intended targets. Also, make sure they actually know the people online that they share certain facts about their lives with. If the person is not someone that they have met personally and trust, it is best to advise them not to share personal tidbits.

There are sometimes situations where a response is warranted, but this should be carefully planned. Any message sent in retaliation should be assertive, not aggressive, and completed with full support. An adult can provide the support or enlist the help of the younger person’s friends to stand up for him or her in a constructive manner.

Putting An End To Cyberbullying

While it does depend on the method of cyberbullying used, there are several steps that can be done to prevent a re-occurrence. While most private messages can be ignored, public displays of bullying are usually eliminated through reporting. There are several ways to go about doing this.

First, be sure to advise the young victim to keep evidence of all cyberbulling activity. Screenshots, recordings, photos, and physical printouts can be passed onto parents, teachers, school officials, and even the police, if it is deemed necessary. Police are now taking cybercrimes and cyberstalking more seriously than they ever have before, and the courts have been known to enforce the laws that are now on the books to the full extent that they can.

Conversely, if the victim is not ready to speak to law enforcement, they can use the services that most blogs, message boards, and social media platforms have in place to eliminate trolls and cyberbullies. These usually include methods to either block the message or the user or report the user to the site administrator. Most larger sites and email forums have privacy and security settings to protect the identity and personal information of users. If this type of system is in place, be sure to suggest that the victim consider using it. Blocking and filtering are basic options that almost all reputable networks have in place.

In conclusion, be sure to offer support and suggestions to a child or teen that is a victim of cyberbullying. Do not underestimate how much the experience can traumatize a young person and provide him or her with sound advice, such as the information listed above, to make it through a trying situation.

We use cookies to help you navigate our website and to keep track of our promotional efforts. Some cookies are necessary for the site to operate normally while others are optional.