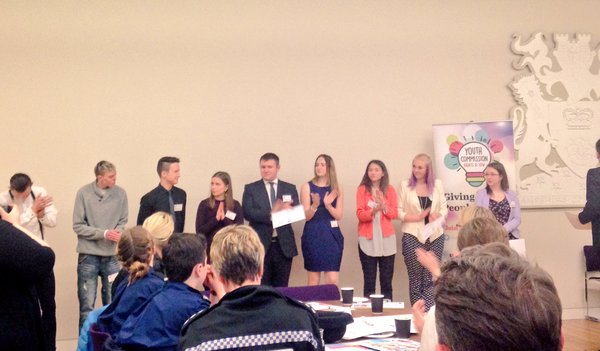 Written by Kylie Barton, Researcher at One Community

This week, the Police and Crime Commissioner’s Youth Commission held an event, to which professionals from all sectors were invited, to launch their priorities as a result of a Big Conversation with Young People.

This is the second year of the Youth Commission, and their enthusiasm, and ability to have an impact is nothing short of inspiring. The young people highlighted six key priorities for them in crime and justice, and these were selected as a result of a county wide consultation with over 3000 young people.

What the Youth Commission said:

Firstly; abusive relationships. Cyberbullying and domestic abuse in its many forms is the top priority for these young people. It was stressed how this links to all of the other areas, and can lead to challenging behaviour, and behaviour replication in later life. This is something our research at One Community also highlighted.

Secondly; legal highs. The group worked with the PCC to create the #LethalHighs campaign to raise awareness that legal doesn’t mean safe. It just means they are yet to be made illegal, which means there are more issues surrounding treating symptoms when it all goes wrong.

Thirdly, the group looked again at the new meaning of ASB (anti-social behaviour). Links to relationships were raised as well as peer pressure and bullying. The young people said how much they valued restorative justice style initiatives such as the community court, and that showing young people the impact on the victims is key. They also put out a plea for more funding to be available for organisations who provide diversionary activities, which they felt have a big impact in curbing ASB.

Fourthly; relationships with the police. It was felt the police cadets was a great way to break down some stereotypes and barriers. Anything that re-humanises the police such as the ‘cops cars’ project were seen as very beneficial.

Fifthly; gangs and youth violence. The focus here was on how crime escalates, and how it affects the wider family and community. As an action on this it was reported young people felt more empowered when those who had been through it and came out the other side worked with them.

Last but by no means least, supporting young victims and offenders. Fixers shared some great films produced by young people who had been on their own journey. Here the focus was on breaking the cycle of crime – from living in an abusive/damaging environment as a child, to replicating behaviour to regain power leading to offending or victimisation.

There is no right or wrong answer, only ideas, and we need the ideas of young people”.

What can we do?

The evening was a true testament to all of the young people involved. There were discussions on the tables of attendees including high profile police staff, neighbourhood watch representatives, and many professionals from statutory and voluntary agencies. There were several points to go away and think about as a result of these discussions:

Young people are too often left out of the conversation when it comes to the institutions that affect their lives and their futures. It is the responsibility of every professional in the field to make sure young people have a space to explore their ideas and come up with innovative solutions to better themselves and contribute to positive change.