TEAM AWESOME are a wonderful part of the volunteers at Eastleigh Museum.

Named ‘team awesome’ for sourcing and collecting food and items for people in need. Jamie and Mike will gladly collect food and items of need for you.

One Community Supporting the VE 75 Celebrations

On Wednesday 6 May we were asked to be part of an Eastleigh Borough Council initiative – a collective effort among the Eastleigh Coronavirus Support Support hub in Eastleigh – to get party fare to care homes across the borough to celebrate the 75th anniversary of VE Day.

Our community transport team scheduled deliveries for Thursday afternoon on our minibuses and half a dozen of our CV Response volunteers went out to shop for every bodies party favourites.

Pictured are David and Sally Lloyds out doing volunteer shopping.

We were delighted to do this as part of our CV Response work. If you are need of shopping, prescriptions or someone to phone and have a chat, let us know on 023 8090 2400 or info@1community.org.uk

Home schooling resources and a “Stay At Home Street Party” pack have been launched by Fareham Borough Council to help residents across the Borough mark the 75th anniversary of Victory in Europe (VE) Day on May 8th.

The Coronavirus pandemic and lockdown has meant events planned to mark the 75th anniversary of the end of hostilities in Europe in 1945 have had to be shelved.

The early May Bank Holiday has been moved to Friday 8th to allow for a weekend of national commemorations, street parties and other events; these may now be held later in the year.

However, VE Day was 8 May in 1945 and Fareham Borough Council wants its residents to be able to mark the occasion on the actual 75th anniversary.

The home-schooling pack is designed to be used each day in the week leading up to 8 May. The Council has also produced a “Stay At Home Street Party” pack for residents. It includes:

The downloadable home schooling and Stay At Home Street Party packs, and the Spotify playlist link, can be found at https://www.fareham.gov.uk/leisure/ve75.aspx

Right now there is a bunch of keen, able and really amazing volunteers helping in the community. 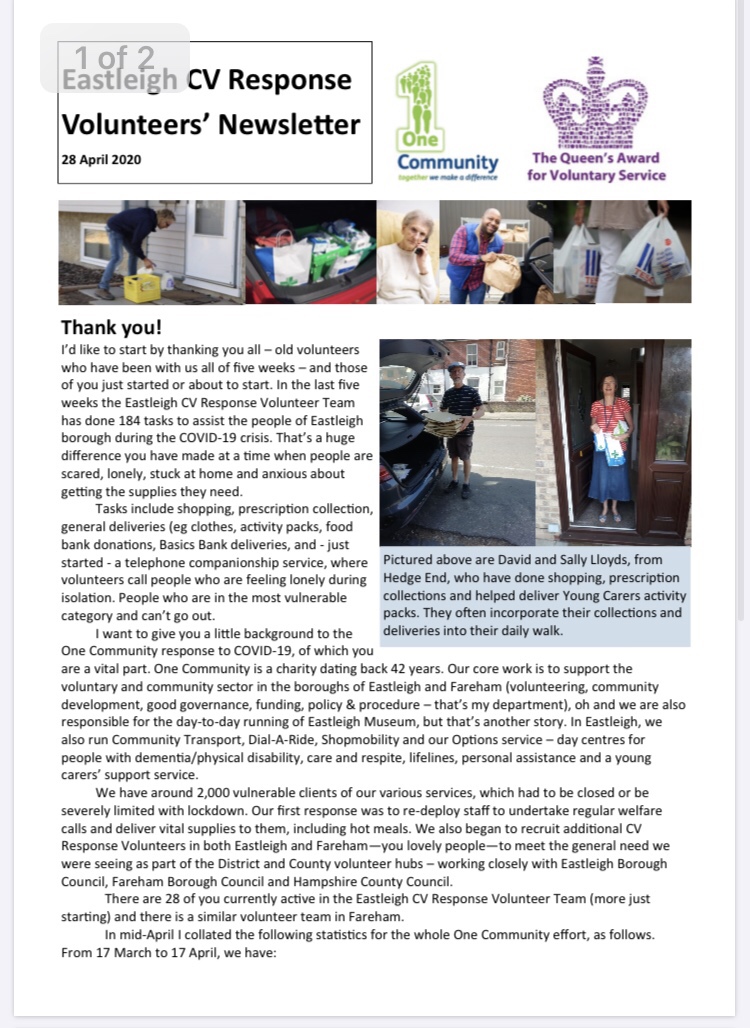 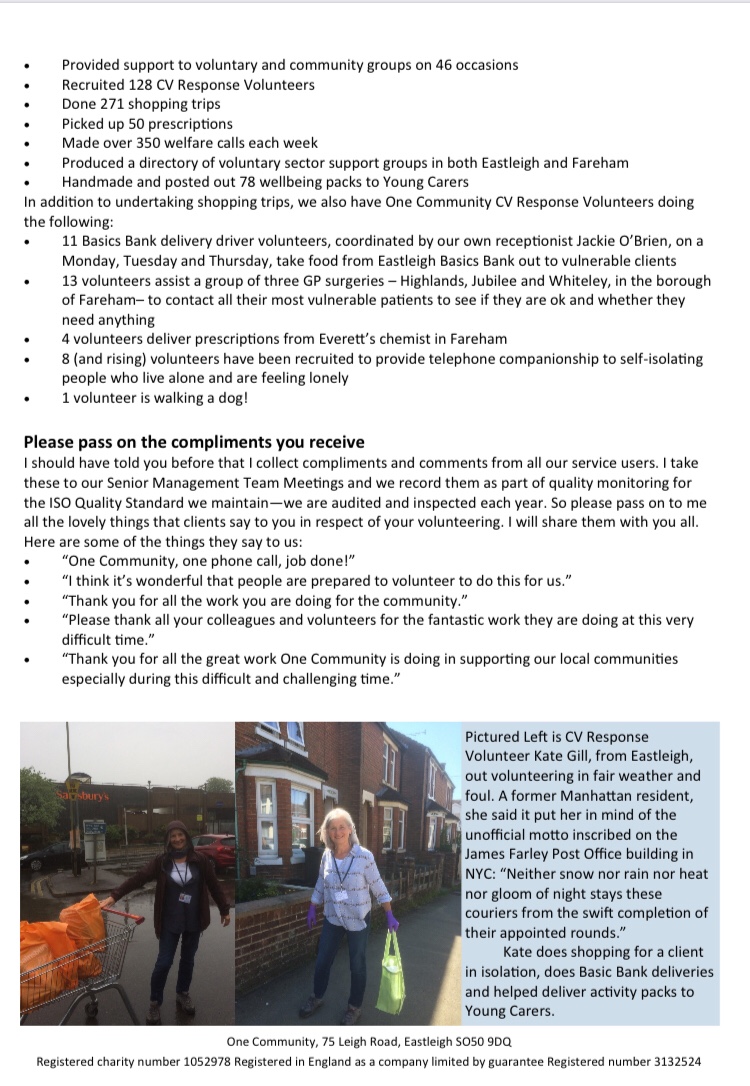 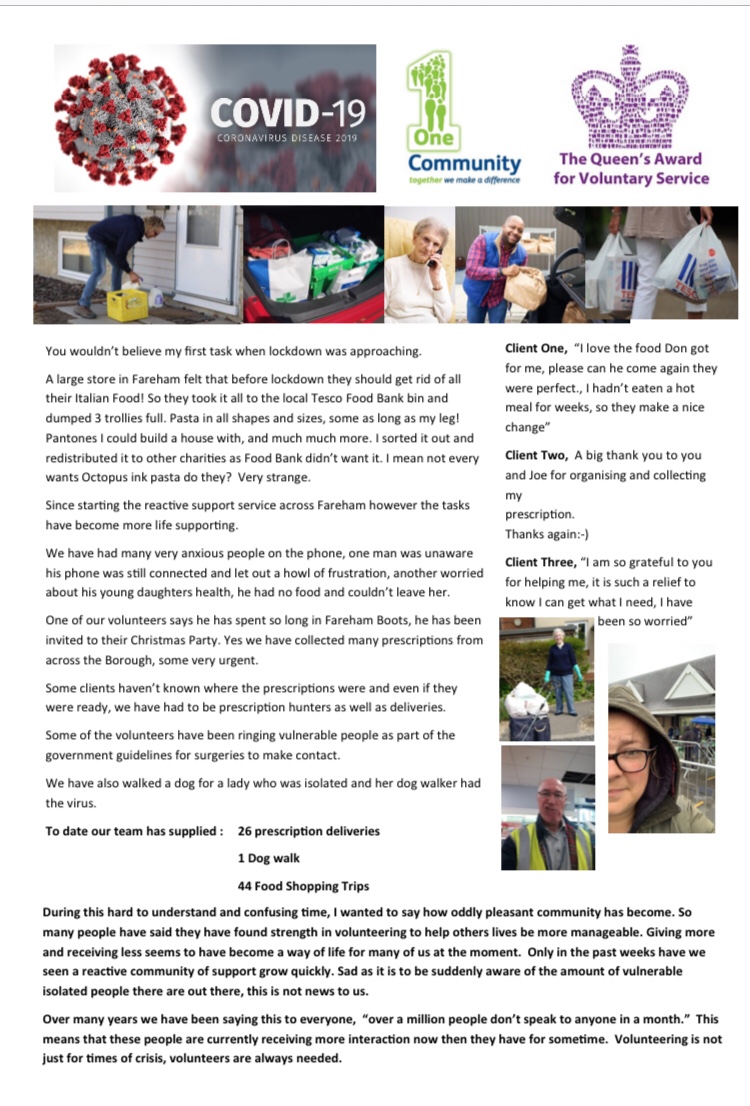 One Community – Able to Help

Covid guidelines are changing and many of our clients and service users will start thinking about going out. As our services start back, times and the service offer may have changed.  Please talk to your usual contact for details. At One Community, however, we continue to offer our shopping and prescription collection service for those who need it for while there is a COVID-19 risk.

Our teams, in both Eastleigh and Fareham, are still able to either offer direct help (shopping, prescriptions, dog walking) or signposting to the help available.

Yesterday the chancellor announced a package of support for charities. It’s an important start, but the government needs to go further, and NCVO (of which one community are members of) will be doing everything it can to make sure it does.

What’s in the package?

A total of £750m in new funding was announced for charities responding to the crisis in the UK.

£370m will go to small and medium-sized charities, channelled through the National Lottery Community Fund (NLCF) and other organisations. It will support locally-focused charities doing most during the outbreak.

Another £360m will be allocated to charities providing essential services and supporting people during the crisis. Some is specifically earmarked for hospices, St John’s Ambulance to support the NHS and Citizens Advice to allow more staff to provide advice. Children’s charities and victims’ charities were also mentioned.

The government will also match public donations to the BBC’s Big Night In charity appeal, with a minimum donation of £20m to the National Emergencies Trust.

It’s a start, but it’s not enough

With charity shops shut and fundraising events cancelled, we estimate charities stand to lose around £4bn in 12 weeks as a result of the crisis. We know how many people and communities rely on the services charities – NCVO members and non-members alike – provide.

This is an important start, but we know it won’t be enough to prevent good charities around the country from closing their doors. Even many that survive will look very different in a few months’ time, with a severely reduced capacity to provide the support that people rely on.

You can read more about the package, and our response, in Elizabeth Chamberlain’s blog post.

MARVELLOUS MARVIN is out shopping for our vulnerable clients who are self isolating. Normally, Marvin is one of our DIAL-A-RIDE drivers. 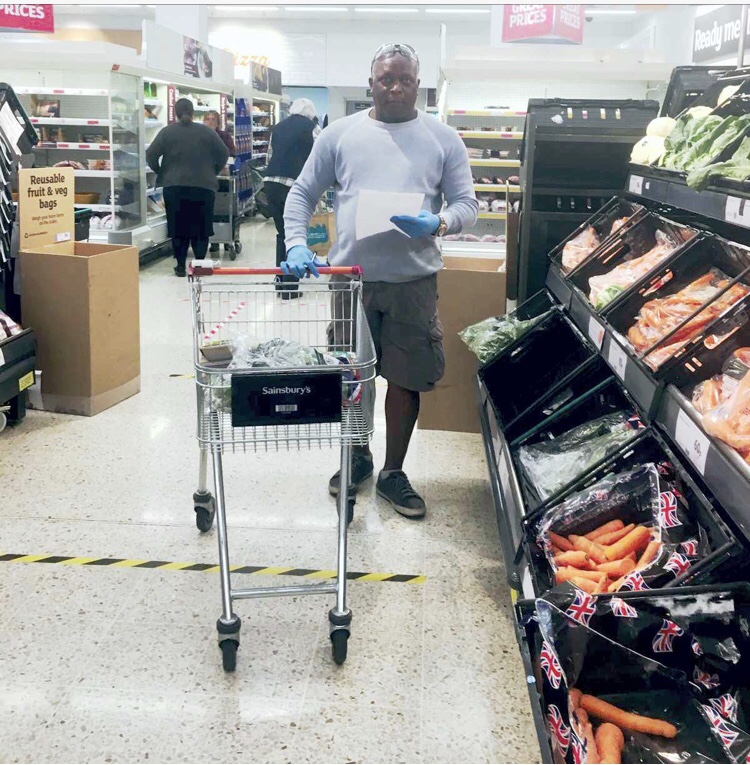 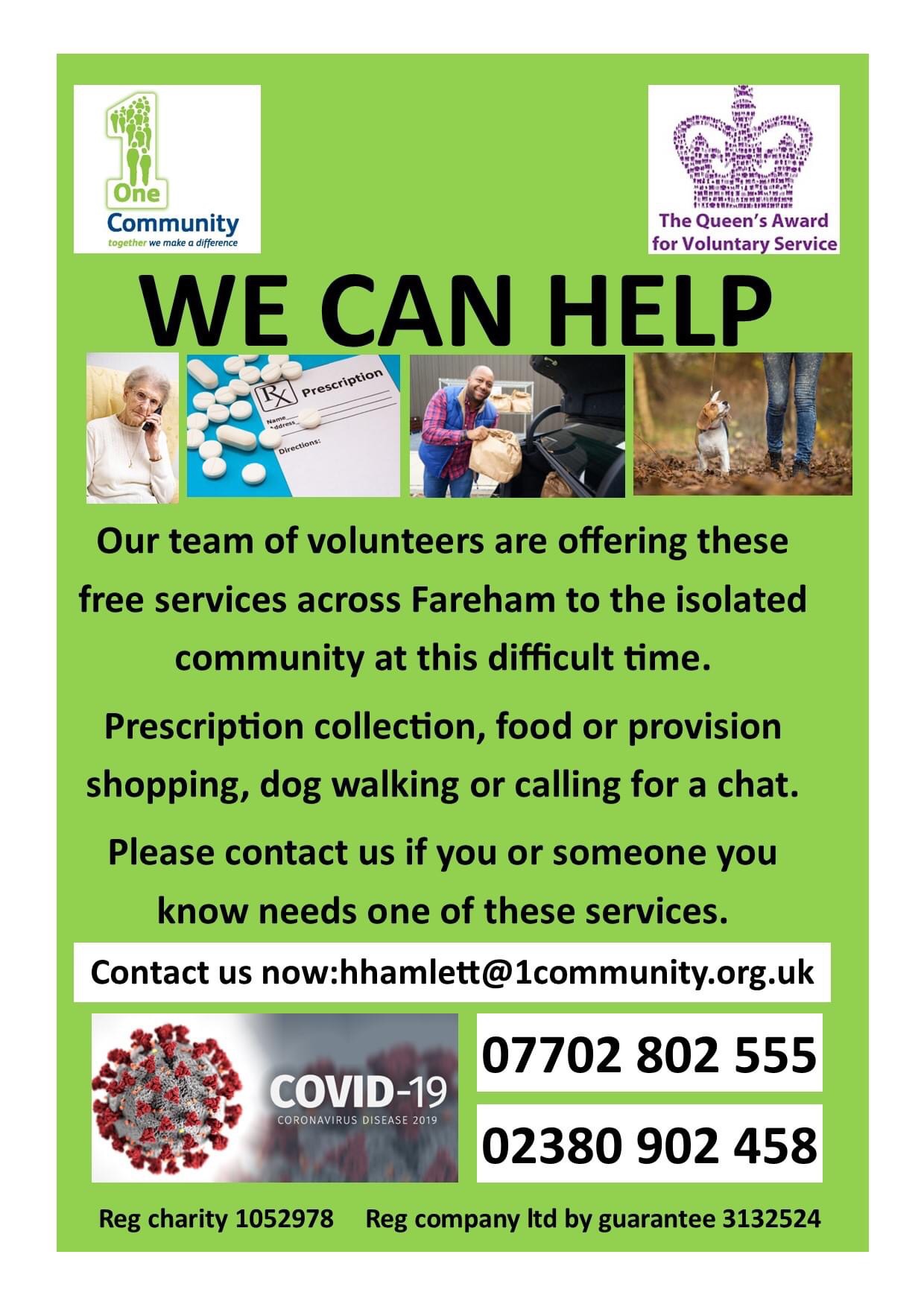 One Community – Able to Help

Although our normal services are suspended our teams, in both Eastleigh and Fareham, are still able to either offer direct help (shopping, prescriptions, dog walking) or signposting to the help available.

Local community Radio Unity 101 FM is still operating across the district, and One Community’s Chief Executive Jean Roberts-Jones will be joining Kelly on the radio as part of a Question and Answer session, 8th April 3.40pm.

We have worked with our friends at Unity101 for a number of years.